Though not verbal, art serves as a medium of communication by allowing people to share their hopes and faiths. Two of us, Koi and I, gathered to utter our hopes for Korean Peninsular’s unification through arts.

I believe that the visual messages that Koi and I deliver will allow more people to have a chance to seriously contemplate ‘integration’ and ‘unification’ and share their thoughts with the other.

Furthermore, the two of us hope the visual messages to guide more artist to join in our footsteps toward the exhibition ‘Nam Hyang Jib Again….’

I wish our sincere message to be the footsteps leading to South Korea and North Korea to entangle their thoughts and build strong companionship, and one day, stretching even further to the neighboring countries to dream of Korean Peninsular’s unification.

There is a prospect of Korean Peninsular’s unification in a near future; yet, when it comes to the unification of people, originally a single nation but divided into two nations, it will take more than a decade. Division of more than seventy years hints at the big hurdles that unification of Korean Peninsular have to confront: differences between two nations in every single area except for language as they share a common mother tongue. And among the challenges, differences in culture and art will be the most difficult gap to narrow.

Now, one female North Korean defector, Koi, who holds a deep emotional connection with North Korean, takes an action to bridge the gap. Koi’s works embrace her sweats and tears in proving ‘The Preview of Unification.’ And Hyungmee Shin, an artist born and raised in South Korea, steps in so that the Koi’s messages can take wings and touch people’s hearts.

The exhibition ‘Nam Hyang Jib Again...’ is the outcome of these two artists’ hope. If the audience was able to feel how the artists united and divided their thoughts during the process, the audience is on the right track. And if that acknowledgement is shared by the public, little by little, people in Korean Peninsular will feel emotionally attached to each other. Either a Korean is born in South Korea or North Korea, the very Jib which Korean wants to be born and raised is Nam Hyang Jib, the root of all Koreans.

This article is written by Sungha Ju, a journalist for Dong-A Ilbo. 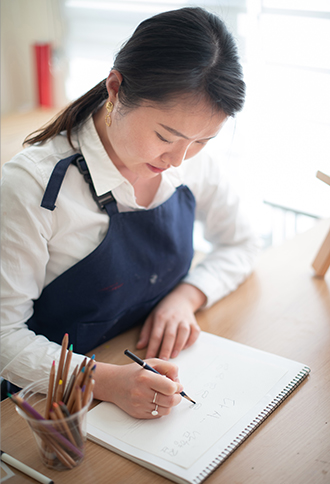 The pseudonym “Koi” is inspired by “Koi’s law.” Koi, one of a carp, grows only 5~8 cm when put in a small bowl. Yet, it can grow up to 12~25cm when put in a big fish tank or pond and 90~120cm when put in a river. So do people; people’s ability and dream heavily depend on the given environment. Escaped from a small bowl called North Korea, I am doing my best to improve my dream and ability in the river, South Korea.

My dream is to be the unification era’s influential expert in the fashion industry. To achieve this goal, I am working as both fashion designer and artist, expressing my dream and experience through arts and thus communicate with Korean society.

While receiving a degree in fine arts, I learned that creativity, which everyone is born with, does help people in healing and looking after themselves. And making artworks convinced the idea. Based on this idea, I studied art therapy in graduate school. Currently, I am working as an art therapist and communicates with a score of people. Especially, by getting to know North Korean defectors in 2004, I have been entangling my thoughts with theirs by having a deep communication in Hanawon (The Settlement Support Center for North Korean Refugees) and individual art therapy session.